Do budgies have a sense of humor? 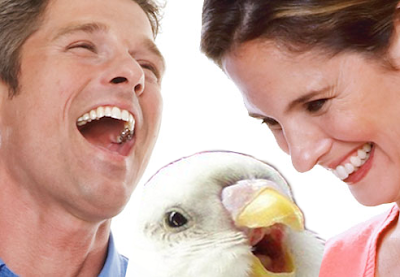 It's that white budgie again! Where does it come from?

It's widely believed that certain birds have a (wicked) sense of humour. A study shows that crows for example have the habit of waiting for unsuspecting humans to walk beneath the tree where they are perched on and then accurately drop acorns on their heads. When they hit their target, they apparently caw in delight, no doubt to draw their victim's attention to the fact that they've been punked. Some birds prefer pooping over throwing things at you, though! When you see a pigeon's butthole above you, you know you can't be safe.

What about budgies, though? These hardy little birds are not only very smart, but also really playful and eccentric. They love to make you laugh by doing all sorts of crazy things, like hanging upside down on a millet string or bouncing around on their perches. Did you ever see them sing and headbang at the same time?

When I observe my mum's budgies, I can sometimes tell that they are joking among each other, probably about us and the daily events in their own budgie culture. It's hard to tell for people who don't know budgies, but if you look closely enough, you will see the shining fun-lights in their eyes when they're uttering all kinds of happy twittering noises. Don't forget that budgies also want learn from humans and that includes our sense of humour, even though they don't get the full image of it.

According to Ryan Reynolds, owner of Victor the budgie, budgies have a natural trait of putting humour into almost everything they say.  Much of his budgie's humour came from poking fun at his mate Betty or making wisecracks about people. He also thought the way people fart is hilarious and made quite a few jokes about that.

Do budgies make you laugh? Feel free to post your story here :-)
Posted by Bika at 7:52 PM