Fresh air is a must, but is it safe?

How safe is it really to ventilate the room, when you have budgies in it?

We know that budgies thrive best in a warm and dry climate. We also know they are susceptible to drafts, especially during the cold seasons.

On the other hand, budgies get ill from living in cold, humid or musky places that never get any fresh air. So what should be done?

You could move the budgie cage to another room and put it back after the other room has been ventilated. If you think it's too much work to move the budgie, you should definitely keep the room temperature at minimum 20°C (or even warmer) while you ventilate it. Of course, it is much safer during a warm Summer day. Then you can even keep your budgies outside for a little while.

Also, never ventilate the room when your budgie just took a bath! Wet feathers and a draft is a bad combination! Think of all those little kids who get a nasty cold from walking outside with wet hair...

This morning, I went to the pet store to find a good bird cage for our future budgies.

I compared the different models and prices and eventually chose a medium-sized cage from the brand Tallinn:

There are two reasons why I bought this cage:


The price of the cage was 70 EUR, which is reasonable, as it came together with a bunch of cage supplies (eating and drinking tray, sitting perches, even a nice-looking toy).

Remember that even a large cage is too small if your budgies have to live there constantly. That's why it's important to give them enough hours of free flight during the day.
Posted by Bika at 10:08 PM 2 comments:

As some of you may know, tomorrow is a big day for me and Erlend... After 3 years of being very happy together, we are getting married! 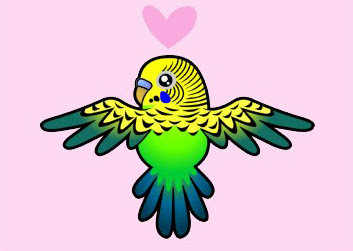 I wish my mum's budgies could witness this moment with us, but the crowd of people would be too much for them. Nonetheless, I'm still going to give them a lot of apple pieces so they can celebrate with us!

With this, I would like to make another announcement: next week, it's my birthday, and I was entirely free to choose my present... ;) we're going to buy a couple of budgies! This is going to be the best birthday I've ever had :)

Many thanks to my boyfriend and all budgie lovers in the world, you make my dreams come true!
Posted by Bika at 12:47 PM 1 comment:

I love budgies so much and this video proves that they are not just great pets, but they can be your best friend too :)

Wild budgerigars have many enemies. I listed the most common ones below:

1. Snake
The brown snake is one of the many natural enemies of wild budgerigars. They are found all over Australia and have extremely potent venom. Snakes are able to forge their way into a budgerigar's nest to gobble up newborn chicks.

... honestly, just the name already gives me the shivers. Have you seen the beak of this thing? They are magpie-like birds, but native to Australia. Like a snake, it raids the nests of wild budgerigars to feed on the newborn chicks.

Hawks and falcons are fast enough to catch budgies in mid-flight with their sharp claws. While budgies are capable of reaching 16 m/s at a fast speed, a hawk can easily triple that speed. At first sight, budgies don't stand a chance against this enemy. But they are very acrobatic and small enough to try and hide from this winged predator.

The Australian Outback is beautiful but cruel. In times of drought, thousands of birds can die. The intense heat makes it impossible to find food and water. Budgies especially need to eat often; they can't survive without food for more than two days. On the other hand, the climate has somehow made them used to living without water. They can live up to one month without water. Even though budgies rarely get lost, they may end up into the desert while searching for food and shelter. From there it can only go downhill, unless they turn back.

Due to industrial development in Australia, much of the budgerigar's natural habitat has vanished. Their conservation status is still secure, but if the situation won't improve, they will soon be endangered.
Posted by Bika at 9:17 PM 4 comments:

Budgies on an airplane?

One thing I was wondering about while being on the plane is whether a budgerigar would be capable of making the same trip as me. Would the air pressure be too much for them? Would it be too cold for them in the cargo room? Would they actually survive a journey by plane?

Transporting any kind of small animal on a plane is dangerous and stressful. Apparently it's not cheap either, and some airlines just don't allow it. Each airline may have a different policy on birds, so you have to contact them about this in any case. Another problem is that budgies are indeed sensitive to drafts and cold air. The place where they store animals is chilly, the outside air at 30.000 feet can be as cold as -55°C (-67F). People who operate the animal care room often don't know so much about a small bird's health, as most animals travelling are dogs and cats. You don't know how rough your budgies will be handled once they are out of your hands.

How do budgies judge air pressure? No scientist knows the answer to this, but the pressure is apparently not the biggest problem because budgies have survived airplane trips before. One guess is that budgies can detect the pressure through their inner ear. Another possibility is that budgies detect changes in altitude through the air sacs that connect to their lungs. Still, I don't think it can be good for them.

There is another way to take budgies on an airplane: if you are lucky, you can keep them with you in the cabin where you can be with them all the time. If your airline accepts this, you better make an early reservation. There might be people on board who report being allergic to birds. Some airlines only allow one animal per cabin during flight.
It's also a good idea to get a certificate of health from your veterinarian, to prove that your budgie is healthy to make the trip. They don't always check it, but it's good to have it with you just in case.
You also need to buy a special transport cage for your bird. It should be small enough to fit under your seat or on your lap. Make sure the bars are close enough to each other so your budgie can't escape.

On the day of departure, you need to provide food and water in the transport cage (budgie carrier). You can put some fresh vegetables in the cage so there is no risk of dehydration.
Bring a towel or a cloth, to cover the budgie cage if your bird is travelling with cargo, or in the cabin if there is a lot of commotion around you. It's important to keep your budgie calm, because the journey will be hard for him, much harder than for anyone else in the airplane. You can also use the cloth to wipe up spills if necessary.
In case of emergency - I hope this never happens to anyone - when your budgie gets wounded during flight, you have to stop the bleeding! Bring some cotton balls just in case. It's extremely dangerous for a budgie to lose blood (I'll come back to this in one of my next posts) so please keep an eye on your bird during the flight.

Personally, I would not take my birds on an airplane, unless it was the only option. Even then I think it would be a bad idea because I think all the stress could be too much for budgies. But it's up to you to rule out the goods and the bads about this mode of transport. I have no statistics on the survival chances of budgerigars on board of an airplane. If you decide to do this, then please do whatever you can to make sure your budgie has a safe and smooth flight.
Posted by Bika at 9:03 PM 10 comments:

Weight is the largest obstacle that all birds must overcome to be able to fly. Budgies have special bones that are hollow and contribute to the bird being light enough to fly. These bones are called pneumatic bones and contain large air-filled sacs that are involved with the respiratory cycle during flight. This is part of the reason why budgies fly so smoothly.
Posted by Bika at 11:03 PM No comments:

In the beginning of the 20th century, the keeping and breeding of budgerigars became very popular all around the world. Consequently, various colours and mutations occurred during this period.

This is dedicated to all people who like blue budgies: the first sky blue budgerigar was recorded in 1878 in Belgium (suddenly I like my home country a little bit more!). Sadly, this mutation disappeared only a few years later, because very little was known about budgies back then, and no one understood how the colours were created.
Posted by Bika at 7:27 PM No comments: