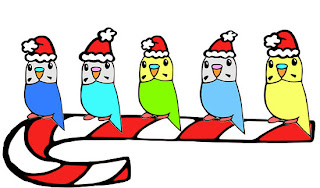 There won't be any posting during the next two weeks, because it's time for Bika's Christmas Holidays :)

The next post will be somewhere between January 5th - January 9th. I am going to tell you the story of one of the most amazing budgies that ever lived. Can you guess who that is?

I want to wish all budgie friends a merry Christmas and a very happy 2011! 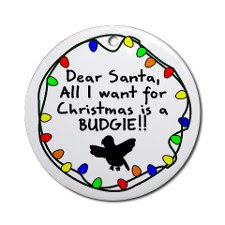 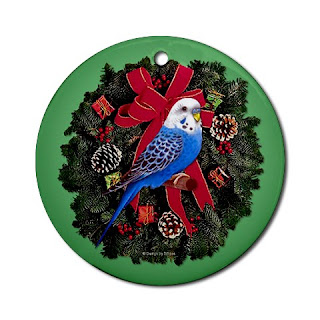 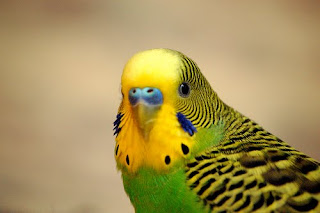 To celebrate my 100th post, I gathered some more epic/funny budgie pictures: 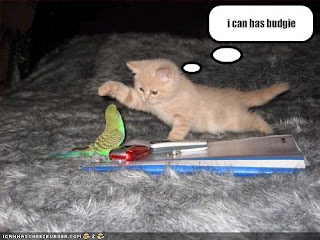 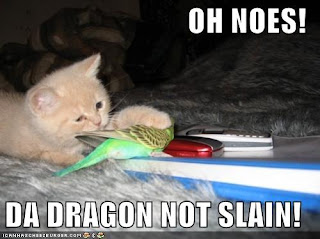 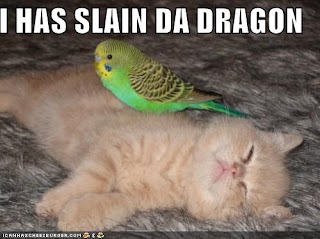 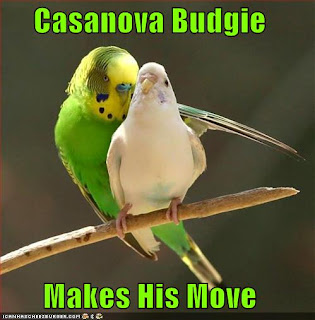 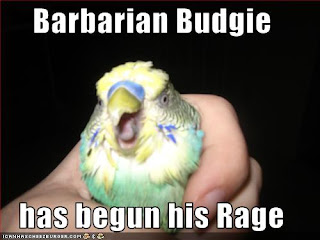 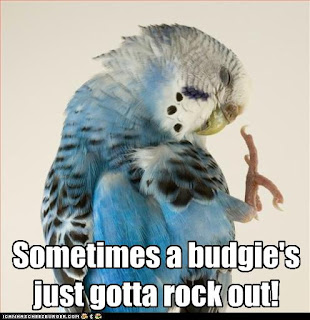 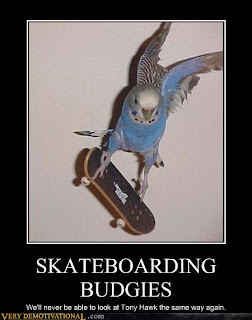 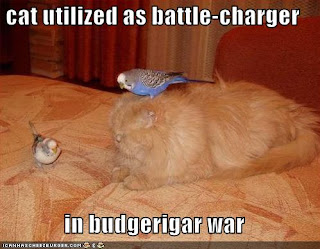 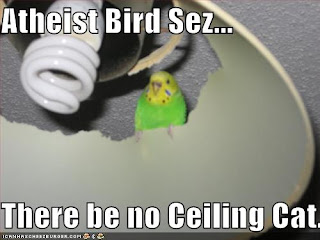 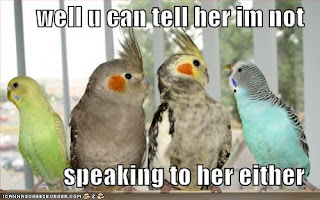 In The Birds of Jamaica: Being a History of the Bird, Its Structure, and Habits by Philip Henry Gosse, Alfred Edmund Brehm, Richard Hill (1874), there is a nice quote that describes the sweetness of budgerigars well: 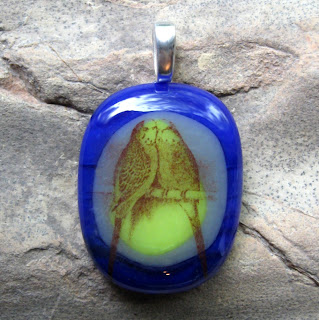 "The male and female grass Parakeet (Melopsittacus undulatus) chirp together and caress each other in the prettiest way imaginable."
Posted by Bika at 1:30 PM 1 comment: 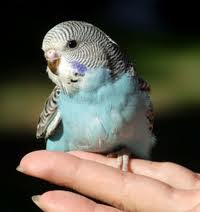 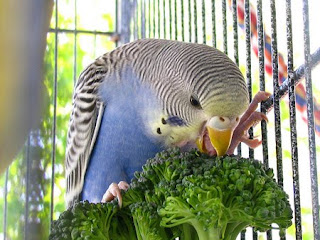 A healthy, balanced diet is good for everyone, also for budgies.

Today I put up a poll, to remind all budgie owners in the world to give their budgies at least one vegetable a day, and to find out which vegetable your budgie likes best. You can find the poll on the top right of my blog.

Can you help me? 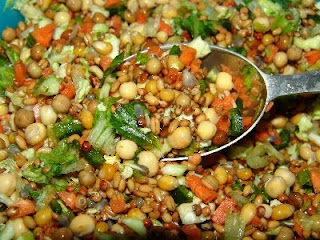 TIP: if your budgie doesn't want to eat his vegetables, you can mix it with the seeds. YUM!
Posted by Bika at 10:26 AM 2 comments: 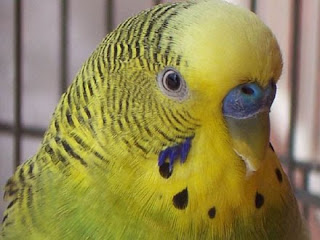 We all know our little feathered friends by the common names budgerigar, budgie, grass parakeet, shell parakeet or just keet.

Do you know how people call budgerigars in other parts of the world?

If you know their name in even more languages, please let me know! Thanks!
Posted by Bika at 5:42 PM 5 comments: 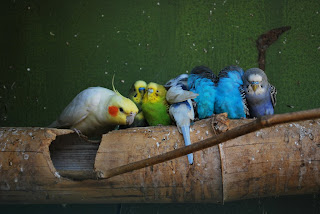 The title says it all ;) 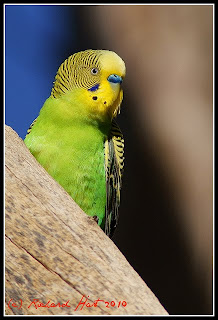 You always have to keep a close eye on your budgie's health. Be sure to weigh him regularly, as weight loss is one of the easiest ways to find out your budgie is sick.

It's very important that your budgie has a balanced and healthy diet of seed, fruit and vegetables and pellets (without preservatives, artificial flavourings, added sugars or colorings).
Budgerigars need plenty of time out of their cage in order to stay healthy and fit. Many budgies don't grow older than 5 or 10 years because most people give the wrong diet to their budgies, or keep them locked up in their cage.

How to recognize a healthy budgie?

A healthy budgie has bright clear eyes, a slim acrobatic shape and strong shiny bright feathers.
Healthy budgies also have a shiny beak (non-flaky or crusty cere). Another good sign is when they're very lively and enthusiastic and fly about all day long, chattering happily.

How to recognize a sick budgie?

If your budgie sits huddled up on the floor, you can be sure he is ill. Or when he just sits on the perch with his eyes closed, using both his feet to rest. It's always better to take your budgie to the avian vet quickly in that case, although they don't always know the answer. My mum was told once that one of our budgies had cancer and that he wouldn't last longer than 2 weeks. Today it's almost one year later, and he is the healthiest budgie of the whole flock!

Symptom list (c) budgiecare.org
Posted by Bika at 11:28 AM 3 comments:

I suppose the answer is yes, otherwise you wouldn't decide on buying a budgerigar.

My answer to this is very simple: you can avoid all this trouble without even touching their wings.

Budgies are airborne creatures that need to fly around every day. But you can't let them escape out into the wilderness where they will only perish. So you must let them do it indoors.

Here you can find a checklist to make sure the rooms are clear of hazards when your budgie wants to fly around inside. Don't come up with lousy excuses like "I don't want my budgie to get hurt so I have to keep him in the cage", just clear a safe path for him. If you don't allow your budgie to fly around freely, you're not suited to be a budgie owner.

If you have an "aggressive" budgie, don't just brutally clip his/her wings but try to get to the source of the problem. The budgie may be stressed, or jealous (e.g. when you're keeping two females and one male). Or maybe they're living in a space that is too small? After you find out what the problem is, get to the solution. Remove the element that causes the budgie to be stressed (this could be an annoying noise like a barking dog, the rattling of a child toy, the buzzing of a lawn mower) or just move your budgie to a quiet room. In the case of jealousity, you can temporarily keep the two females apart until they both calmed down. Of course, when you clip their wings, they calm down because they're too scared to make a wrong manoeuvre and fall down without being able to fly back up again. Wouldn't you be?

Besides, there are very few to no conflicts between budgerigars. They love playing and they might go as far as playfighting, but they would never injure each other. When it comes to breeding, they might be a bit more aggressive. But then again, it usually doesn't go any further than a single peck that serves as a warning.

If you want to tame your budgie, you have to do it kindly. Clipping their wings is not kind at all. There's not only a high risk of hurting them, but you're also horrifying your budgie while you are doing it. For the rest of your life, he will regard you as the monster who stole his wings so that he cannot be a real budgerigar anymore. Real budgerigars need to fly.
With doing it kindly, I mean that you have to gain his trust. Whisper soft words to him, feed him little tidbits of food, just talk to him and tell him you're there for him and care about him. After a while, he will come to you automatically and offer you his friendship in return for your kindness.

Do you want to know why I'm writing this? Today, my mum bought a young dark green budgie in the local pet store. The little budgie is not even eight months old. When I saw him, I immediately saw the horrible thing they had done with his right wing. His breeder has cut HALF of his wing off. It looked so ugly that I was amazed that the budgie had survived it. If you still want to have your budgie's wings trimmed - consider all of the above facts first. The budgie that my mum brought in today is not able to fly and flutters around like a drunk hurricane. This can be just as dangerous as letting a budgie fly around in the room - and much harder to avoid accidents.
Posted by Bika at 3:11 PM 12 comments: 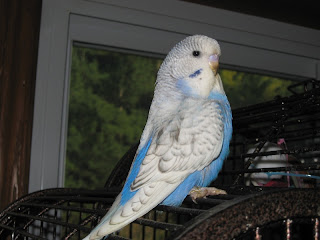 Despite their enthusiastic and lively nature, budgies can be shy too. When you're making a budgie shy, you will notice how he suddenly looks the other way, a little confused. He might start preening his feathers, scratch himself or peck at some random grains. Amazing how much this resembles our human body language!

Here's another funny budgerigar comic (click on image to enlarge) : 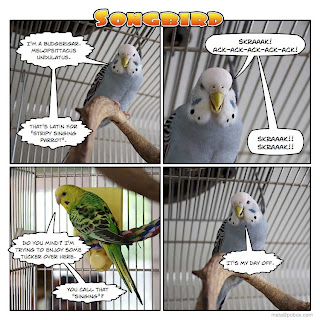 I actually really enjoy listening to singing budgerigars :) they make me happy.