"A budgie is probably the last thing you expect to land on your head while eating a bag of chips in Shetland.
But that is exactly what happened to Jill Newman as she strolled down a street in Lerwick enjoying her takeaway snack.
The bright yellow bird was about to become lunch for a hungry seagull when it decided Jill's chips looked tastier."


"The bizarre bombing run was triggered by a flock of seagulls that had just 'mobbed' the smaller bird - which was tagged and looked like it had escaped from someone's home - with one snatching it up in its beak.
But upon seeing Jill and her mother Betty Keegan strolling down Commercial Street carrying the tempting take-away snack in Lerwick, Shetland, the gulls dropped their catch."
Jill said: 'The whole situation must have looked a laugh. It was just the last thing you'd expect when you're walking along eating a pack of chips.'
'I felt something scrape my head then saw it bounce off and hit a shop window. I couldn't believe it when I saw it was a budgie.' 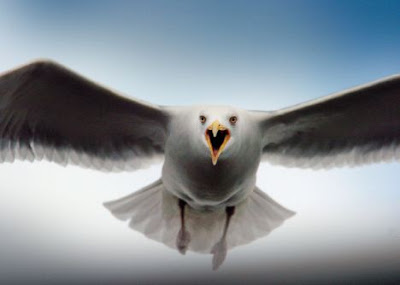 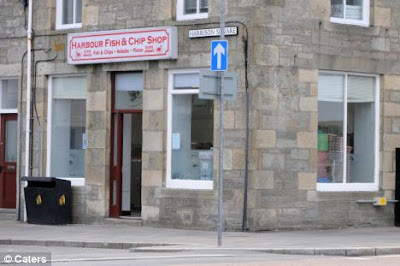 Mrs Newman had just bought a portion of chips from this takeaway in Lerwick when she got attacked by the seagull.


The budgie is now safe at Betty's place where she is looking after it until someone comes forward.
Read more: http://www.dailymail.co.uk/news/article-1311860/Seagull-bombs-Scottish-woman--live-budgie-Was-chips.html#ixzz1F9MTda2d
Posted by Bika at 10:35 AM