Can budgies and canaries live together? 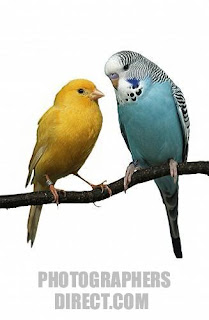 As a general rule, it can be quite risky to house two kinds of birds together in one cage. In this case, however, the budgie doesn't play the weak part. More likely the canary will be in danger. Budgies can be quite pushy to other birds, they are even bold enough to attack a cockatiel (even though the cockatiel is more likely to win from the budgie). Don't confuse cockatiels with lovebirds though, because lovebirds can't stand budgies and will kill them when they come too close.

After some research on the internet, I confirm that I don't recommend keeping budgies together with canaries or any other domestic finches because:
Budgies can suffer the same fate if they are put together with bigger parrots, so putting together different kinds of birds is definitely not a good idea.

IF you still want to give this a try (after all, canaries don't eat the budgies' food and are almost the same size as them), then you should do the following things:
But from time to time, you can find real friendship between them :)