This reminds me of Frodo and Isla sometimes...

New poll: when do your budgies like to fly around?

First of all, I would like to thank everyone who voted on my last poll! I got a nice total of 350 votes and that gives me a good view on what you would like to see here. My blog is originally all about budgie facts, but it's good to provide some variety, like artwork and pictures, videos, health tips and newspaper stories. At the end of every month, I'll try to prepare a quiz to test your knowledge :) this will be fun!

I've created a new poll about "preferred flight times" for your budgies. For example: my budgies are bursting with energy every morning, so then they want to come out to fly. In the afternoon, they like to take a nap and play with their toys. In the evening, mostly one or two hours before bedtime, they like to come out to explore a litte before going to bed. That's their daily routine :) Do your budgies have something similar? Feel free to vote!
Posted by Bika at 12:22 PM 2 comments:

Budgies are popular in the US

According to statistics from the American Pet Product Manufacturers Assn, 45% of pet birds kept in the US are budgies!

There are roughly 370 known species of parrot and many of them can be kept as pet birds. These tiny, clever budgies are stealing more hearts every year!

There have been fewer posts the last couple of days, because I haven't been feeling too well. I have had a lot of stomach/bowel problems since the beginning of 2011, and now it turns out I'm probably lactoseintolerant...!

Well,food intolerance also occurs among budgies. You know that these little birds can be very curious. While they explore our homes, they find things like exotic plants or flowers. When they land on top of the book case, they can start gnawing on the polished wood. Since budgies love to chew on things, they can easily get poisoned by accident. Some plants may cause severe pain and vomiting, so you have to be careful with what you keep in the house. Budgies who suffer from poisoning, often throw up food. It may cause a crop infection but that is not always the case.

Never feed these things to your birds!
As a general rule, you should never give any human food to your budgies.
However, they tolerate the following food:

Honestly, this is one of the sweetest budgie drawings I've ever seen.

Done by the Japanese artist misaki. She looks a bit like our Isla :) 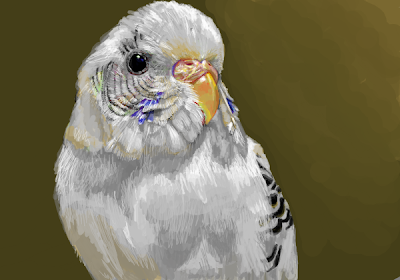 Budgie of the Month: Inko

There used to be a little wonder on internet for the eight-year old me... a budgie called Inko. I used to have a tiny folder with pictures of this budgie because I thought its colors were so pretty. When I search the internet now, I find hundreds of budgies that are called Inko! But I'm pretty sure this is the one:


This pretty bird struck me when I was a kid. I'd never seen a budgie that isn't just green or blue. I didn't think it was possible. I even made a drawing of this budgie, with its wings opened as if it was flying, then cut out the drawing and attached it to my bedroom ceiling! That way, the beautiful bird could always be with me and watch over me at night, while I slept. I know it's a crazy story, but believe it or not, there is still a budgie drawing on my bedroom ceiling at home :)

PS: it's been pretty much fifteen years now, so the website doesn't work anymore. This is the only picture of "Inko" that I found. Maybe I'll scan some of my old folder soon!
Posted by Bika at 9:08 PM 2 comments:

Did you know that the first European to write anything about budgies was the English ornithologist John Gould?

Which reminds me of something: in primary school, I was already known for my love for birds. Right before I moved on to Secondary school, my teacher said to me: "You love birds, so maybe one day you could become an ornithologist. You should write down that word and remember it."

Anyway, John Gould sailed to Australia to study the birds of that country. The result of this trip was The Birds of Australia (1840 - 1848). His wife Elizabeth made hundreds of drawings from specimens for the publication of his work.


Gould not only named and described our budgerigars, but he is also credited with introducing them to Britain. He specifically mentions the "beautiful little Warbling Grass Parakeet", which, prior to 1838, was so rare in the southern parts of Australia that only a single example had been sent to Europe.

During his explorations, he explains that budgies were flying in flocks of up to a hundreds strong over the Liverpool plains. Describing these as "the most animated, cheerful little creatures you can possibly imagine", he managed to bring a live pair back to England. Gould apparently also commented on how good they are to eat (I do not approve of this at all!!!) - hence the Aboriginal name "Betcherrygah". "Budgerigar" is in fact a corrupted version of this Aboriginal name. In Dutch, on the other hand, we call them "Grass parakeets", which leans closer to Gould's version.
Posted by Bika at 6:02 PM 1 comment: