As I announced on my Facebook page last night, I will reactivate my blog soon, after more than two years of downtime. I will first reply to your reactions and comments, then work on some content (a new budgie of the month, Yuki's quotes), maybe add some new features...
In the meantime, I can already tell you that we got two new birds: Tobi (sky blue) and Pumpkin (yellow). I will introduce these cutie pies properly in my next post.

At the end of July, something bad happened...

I started to notice that the two youngest of my budgie flock, Leo and Pixie, were more quiet than usual. It was hot and clammy outside and I thought, the budgies must have had a bad night because of the weather; but what I failed to see is that both Leo and Pixie were showing the first symptoms of a slumbering illness.

The next day, I clearly noticed that something was wrong with Leo and Pixie. They didn't make a sound and they stayed in the same spot all the time. I got worried, drove to my parents to pick up a transport cage and called the veterinarian as soon as I had arrived there.

A couple of hours later, I arrived at the vet with all four of my budgies (Frodo, Isla, Leo and Pixie). Frodo and Isla weren't showing any symptoms up to this point, but it was clear that the two other budgies were very sick. I told the vet that Pixie had diarrhoea and that Leo seemed to have lost a lot of weight. The vet couldn't immediately say what was wrong with them, but she would examine them and keep them there for the night. I left, knowing that they were in good hands. After all, she has saved my budgies before.

The next morning, I got extremely bad news and it hit me like a bullet. Both Pixie and Leo had died in the early morning. It had gone really fast and the veterinarian was shocked - clearly she had no idea why this had happened.
My world crumbled apart after I heard the message on my phone. They were so young. They should have lived. I hadn't even had the chance to say goodbye to them. I should have reacted sooner. I should have taken them to the vet the day before. Frodo and Isla were still alive, but for the next couple of days I was terrified to hear more bad news.

While I kept blaming myself for what had happened, I had to wait for the autopsy to hear what had caused their deaths. Meanwhile, the vet kept Frodo and Isla in the hospital, so she could keep a close eye on them. We visited them every day, promising them that we would take them home soon, and everything would be allright.

One week later, the results came in: a streptococcal infection followed by sepsis. At least it happened quickly :-(

I read up on this disease and learnt that a lot of budgerigars can carry this kind of organisms without even being sick. There needs to be a trigger factor (something that weakens the bird so that they become an easy target for bacteria) that enables the bacteria to invade the blood stream and spread through the body. I learned that Frodo and Isla survived the disease because their immune system shielded them from getting sick. Then why did Pixie and Leo get sick? I'm not 100% sure but it has to do with genetics (they react differently to diseases than Frodo and Isla) and the fact that during their short lifespan, they didn't really have a chance to build up immunity against any diseases.

Trigger factors for bacterial infections include: overcrowding, poor diet, low hygiene, inadequate parasite control and extreme weather conditions. These factors can determine your bird's life or death so please indentify and correct them on time. When budgies are showing illness symptoms, then they're often very sick already.

I know for a fact that the extreme weather conditions were the trigger factor here. Secondly, I had bought what turned out to be the crappiest aviary in the world - I will tell you about this later.

We buried Leo and Pixie in a nearby forest, close to home, along with some of their favorite toys. It was the hardest thing to say goodbye to them and I hope I will see them again some day. I will never forget them and the good times we had together.

Frodo and Isla are back home, recovering from a week at the vet's place. They still call out for Leo and Pixie and it's heartbreaking, knowing that Leo was Frodo's mate. I know he misses her and there is nothing I can do to bring her and Pixie back. We are considering buying two new birds, because I know Frodo and Isla miss being part of a bigger bird flock. But first they need to recover. Dealing with loss is not easy, especially when you have the feeling that you lost your birds way too early. I hope Pixie and Leo find peace and freedom, wherever they are now.

Here are some of the last pictures I have of them:

New poll: budgies on a roadtrip?


I've come up with this new question for no other reason than that I'm considering driving 3000 km with my budgies next summer.

I know this sounds crazy, right?

Anyway, you can only select TWO possible answers in this poll. It doesn't really matter whether you have actually been on the road with your birds or not - I would like to know your honest opinion too. Do you think it's perfectly possible or not?

I have a bit of road experience with my birds. I've driven them to the vet and back a few times, which is 10 minutes by car. I drove 50 km on the highway with Pixie and Leo on the evening that I bought them. They usually get alert, but not really stressed, and it definitely helps to cover their cage a bit.

I can argument that long-distance driving with budgies would be okay under certain circumstances, such as:


On the other hand, I would really like to hear if anyone has had a negative experience with this? All reactions are welcome! :-)
Posted by Bika at 4:42 PM 18 comments:

Poll results: how old were you when you got your first budgie? 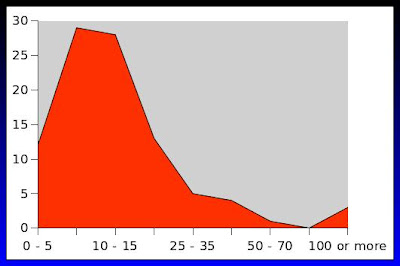 The left side shows the percentage (a total of 812 people has voted, thank you!!) while the horizontal line shows the age of the voters.

The graph shows that budgies are hugely popular among 5 - 15 year olds. But are they really suitable pets for people of all ages?

All kids should get the possibility to grow up together with a pet. Budgies, however, are not ideal pets for all kids. For one, physical contact is unmissable for kids aged eight and below. Not all budgies like to be petted and you can't "cuddle" with them or squeeze them. Additionally, even the tamest budgerigars will get spooked when you're making a brusque movement or noise in front of them - something that a lot of small kids will do unintentionally.

But when your child gets older (ages eight and up), budgies might just be the perfect pets. You will find that your kid takes more time to observe the birds and ask questions. In other words, they become the perfect caretakers for budgies: gentle, loving and patient. I must have been 8 or 9 when I got my first budgie and I can only agree to this!
Posted by Bika at 3:57 PM 5 comments:

Do you expect Disco will say it?

Do you remember Disco the budgie? Erlend showed me this video yesterday, and I thought it was amazingly cute! He's trying to say that "no one expects the Spanish inquisition", a famous line from the Monty Python series. Our budgies haven't started talking yet, but I can tell they are trying sometimes! More updates soon.