Picture of the day xD

I was on the phone with my parents and I couldn't understand why Erlend was taking pictures of me... but now I do :p

Thanks to Petra Allerlei on Deviantart, I found this awesome picture :D

OMG, I was laughing so much when I found this crazy couple! Budgie was really driving the Pheasant... I was watching them almost 20 minutes! Pity is there is horrible fence and this is the best shot I took :( Still I hope you like it!

DID YOU KNOW THAT... these birds were also referred to as the White Phoenix?

And you know what? This budgie is not only rider in the world! Behold!"

Some budgies don't like to walk on their own feet, they want to hitchhike instead! ;-)
Posted by Bika at 10:48 AM 1 comment:

Cuties! The budgie reminds me a bit of the budgie on the tennis ball ^_^

All images are reblogged from We Love Budgies!
Posted by Bika at 5:08 PM 1 comment:


As many of you know, our little Isla has been sick for a long time. The problem was clear: she kept having 'retching fits' and when it got worse, she threw up. Otherwise she seemed to be healthy. I contacted the vet about this several times. He told me to give the budgies vitamins and some kind of homemade food.

In the end, he said that Isla was throwing up because she tried to clean her vent. That sounded more than a little ridiculous. I didn't study veterinary medicine, but I have a lot of experience with budgies and I could tell that the problem was crop-related. It just kept getting worse and worse. I noticed that she was losing weight rapidly. Most of the time she spent eating, eating, eating, but she kept throwing up the food. When I contacted him again, he admitted he didn't have a cure for the problem and suggested euthanasia!

I think I've never been so angry in my life. Isla is a young budgie, not even two years old, and he would just put her down without knowing what the problem is - without knowing that there's still a chance to save her?

That's when I started searching for a veterinary who is specialised in birds, someone who doesn't just treat cats and dogs like most of them do.
I found someone who lives fairly close to our place. Two days later I had an appointment. The veterinary, Inge Thas, immediately looked inside Isla's crop. The source of the problem was obviously in there. A few minutes later, Isla was diagnosed correctly with avian trichomoniasis.

Definition from Birds Online:
Another possible cause for vomiting is a parasite infestation of the crop. In budgies, the so-called avian trichomoniasis occurs quite often. Trichomonas is a protozoon and can kill a bird. The liquids birds throw up often smell fishy. This disease is highly contagious and all birds of a flock have to be treated. When parent birds feed their chicks or when adult budgies feed their partners, Trichomonas is transmitted. It also survives in the drinking water. Once an infected bird drank from the water, other flock members can be affected, too.

I hate saying this, but Isla's crop was FULL of those things :-( And since she kept feeding Frodo while she was sick, he got sick too.

Inge Thas was able to save my two birds, thanks to giving them the correct medication and care. I'm still torn with regret because I used to put all my faith in someone who doesn't know a thing about budgies. They have been suffering for nothing. But this is not going to happen again. If my budgies would get sick again in the future, I will know where to go. I want to encourage everyone here to do the same. Find a veterinary who is specialised in birds, your budgies don't deserve any less!

P.S. This kind of parasite infestation is apparently quite common in budgies. If you notice any of the symptoms mentioned above, do not hesitate to seek help for your birds.
Isla probably caught it from another budgie in the pet store where I bought them.
Posted by Bika at 1:03 PM 13 comments:

Budgie of the Month: Aladdin

Budgies are strong creatures, and by the time you notice that they're sick, they're often so sick that you'll have to do whatever it takes to save them. It's not always possible, and the death of a budgie can break people's hearts. My mother told me (when I told her I was going to buy a couple of budgies) that I would be broken if my birds died. I told her she's right about that, but that doesn't stop me from doing my best to make sure that these birds get a happy life. The story below reminded me of this. It's really touching.

On February 20th 2012 we lost Aladdin to cancer. He only started showing sickness 2 days before he passed away, we tried everything we could but unfortunately we couldn’t save him. He was the sweetest bird with the biggest personality and we loved him so much. We miss you Aladdin and are glad we got the chance to be a part of your adventures. 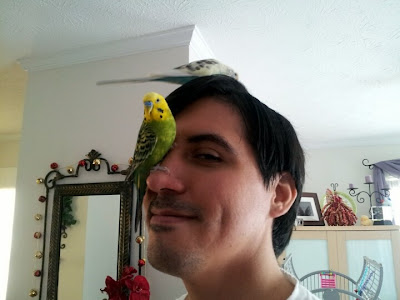 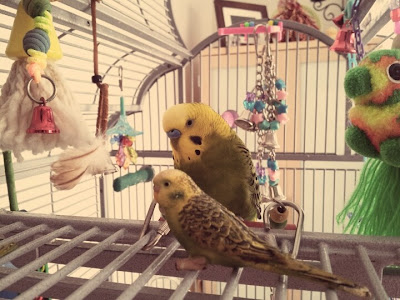 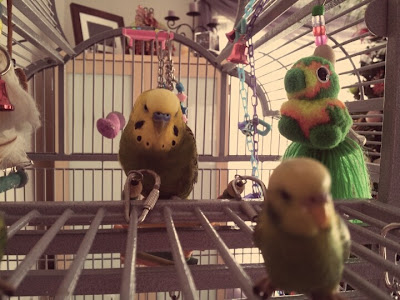 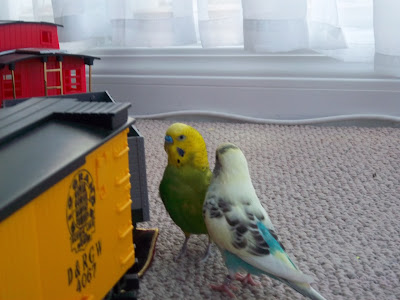 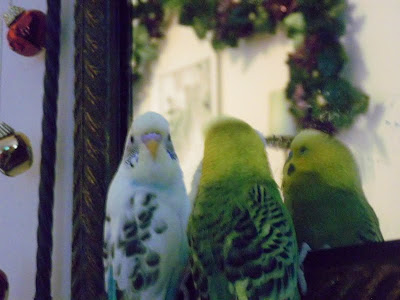 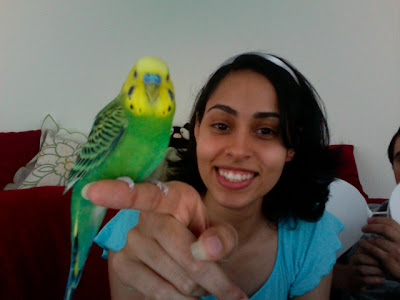 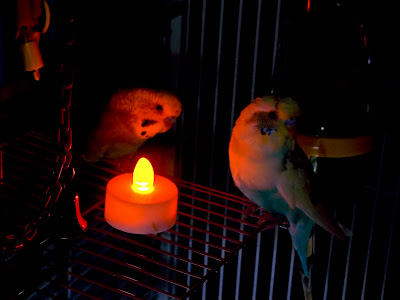 R.I.P. little budgie. Hope you will find nothing but peace and happiness and a warm, sunny sky.

All photos are © stefanieandadam on tumblr
Posted by Bika at 10:07 PM 3 comments:

I got this one from Kiwi Budgie's blog. Amazing!

Visit msnbc.com for breaking news, world news, and news about the economy
Posted by Bika at 9:27 AM 3 comments:


Susie the budgie cares for swallow baby Max in Thale, Harz, Saxony-Anhalt, Germany. Max the tiny swallow tumbled from the nest. Animal trainer Jens Rennecke spotted the tiny bundle of feathers and took the baby bird home with him. Max found an attentive adoptive mother in the form of eight-year-old budgie Susie.