As some of you may know, I'm planning to add some extra features to my blog soon. This time, I'm moving the ball into your camp. What would you like to see more of in the future? It's a multiple choice poll, so you have the option to pick more than one answer :)

Because it's one of the cutest things I've seen today.

There's a little surprise at the end! :)

No, these are not new budgie names! :)

A week ago, our little Isla got sick for the first time. I noticed she was regurgitating a lot, but soon enough I saw that the "regurgitating" was actually more like "retching fits". At some point, she vomited once, but that was enough for me to go crazy. I started searching through my budgie books: could it be a crop infection? Psittacosis? Simply indigestion?

I called the local veterinary and he came to our place to have a closer look at our bird. Isla doesn't like to be held, so she really bit his finger hard. The vet said that she had a few symptoms of Psittacosis, which made me go "aaaargh" and "noooo" but of course it's way too early to draw any conclusions. He added that it's more likely that Isla has some kind of infection in her crop, which often leads to retching.

So now they've been on antibiotics for a week - that's right, Frodo as well, because he has been taking such good care of Isla that he might be carrying the same disease now - and I can really tell there's a difference. Isla is living up again, she's getting more chatty and active than before. Frodo doesn't seem to be ill at all. He's too busy chasing Isla all the time!
Other than that, the vet gave me some tips that I never heard or read about before. But I can assure you it helps!
As a result, you will get a nice, simple yet very healthy mix for your budgies. My budgies have been eating from it for a week now and they seem to really like it.

Poll results: how old are your budgies? 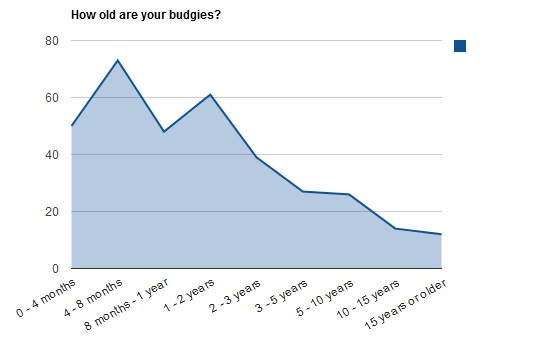 The results show that a lot of people own young budgies. In pet stores, the demand for "nest-leavers" is high. People can't resist the sweet babyface of a 5-month old budgie, and they often make the mistake of only buying one of them. Another fact is that budgies don't often get older than 10-15 years. You buy a budgerigar, knowing that you want to spend as much time with your bird as possible. This is all perfectly understandable; I also bought two budgies that were between 4 - 8 months old. I figure that this is as young as they're allowed to be sold in a pet store.
My point with this poll is that I want to encourage more people to choose for older budgies. Try for once to ignore what they say in all the budgie books: "pick a budgerigar that looks young, healthy, with shiny feathers" and so on. Rather think of this: pick the weakest or the oldest budgie you see. Turn things around for once and if your intentions are good, you will probably give that budgerigar the best life he could ever dream of.
I'm actually planning to start doing this, as soon as my husband allows me to have another, bigger cage!

I also wanted to see if there are actually people who own any budgies that are older than 15 years - which is very old for a budgerigar! As I'd expected, there aren't many, but those 12 people who voted deserve a major thumbs-up! Keep up the good work! :)
Posted by Bika at 10:36 AM 3 comments:

New pictures of Frodo and Isla

In the first picture, Frodo and Isla have been with us for nearly two weeks. You can tell that they're getting comfortable. In the last picture, which was taken this morning, they are confident enough to fly to my hand. They're amazing little birds!
I've decided to take a break after this post, mainly because things are getting busier at work, and I also need a bit of time to polish up my blog. If all goes well, I should be done by December 1st. Take good care of your birds and see you soon! 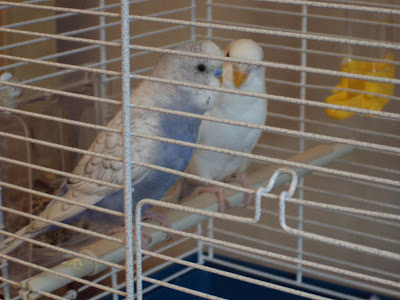 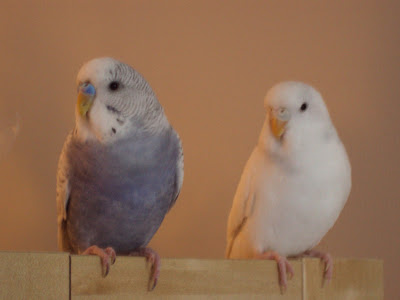 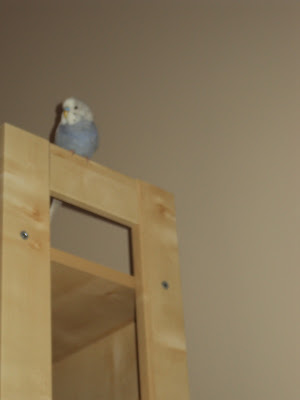 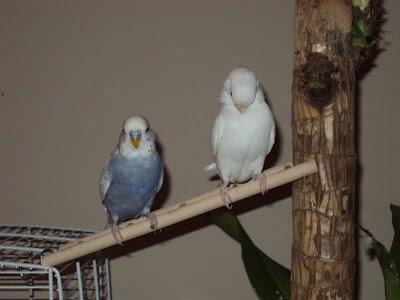 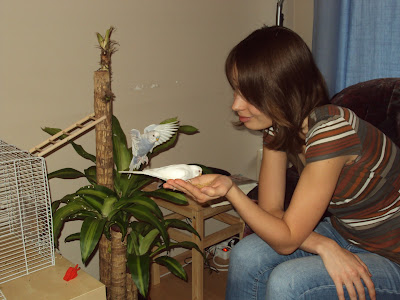 "My Parakeet Knocking Things Down"

This was the first budgerigar poster I ever had. I was about 8 years old, I think ^^ 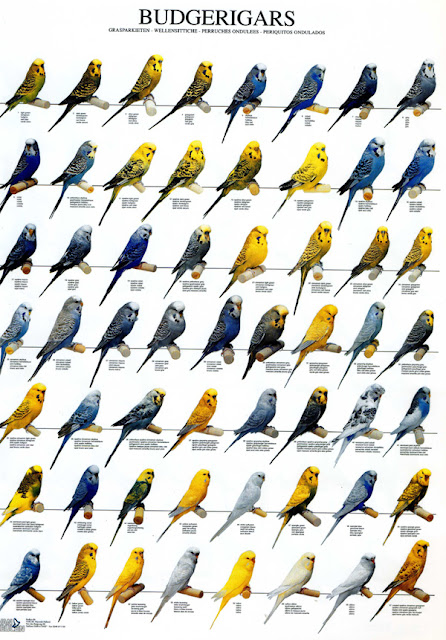