Can budgies and rats live in the same household?

A couple of days ago, one of my collegues asked me if I could babysit her two rats while she's on holidays. I told her that it shouldn't be a problem. However, I read some scary stuff online about rats attacking, killing and eating budgies. What?!

No matter how tame some pet rats are, they will always act on their instinct. Apparently there have been quite a few incidents where rats bite budgies through the cage bars. Their nose and teeth are narrow enough to bite off toes, etc. This kind of wound causes serious infections and might result in death. It is also said that rats will attack pretty much any small critters. Other sources claim that rats aren't known for killing birds, just for eating their eggs.


A few people claim that it's safe, as long as you don't leave them alone, or if you just keep the rats in the cage. The picture above is really sweet, but it's naive to think that rats will not attack the budgies. So if the rats and the budgies are out together that week, it will be under strict supervision by me and Erlend.

Answer: sadly no, unless you are there to keep an eye on the rats while they are out of the cage.

Happy 24th Birthday to Erlend Alvestad, my love, and proofreader of this blog. Our budgies were saying Happy Birthday too, in their own, adorable way :) Once Frodo starts talking, he is never going to stop!!!
Posted by Bika at 12:21 PM 2 comments:

Cute! Note the budgie feathers on the yellow wolf :)
(click on the image to see full size)

"Under my thumb" (video)

Do budgies get seasick?


I started wondering about this after we bought our budgies a swing. Frodo is having a lot of fun with it and he keeps rocking back and forth, sometimes while he's hanging upside down. I know that if it was me, I would get seasick very quickly, as I'm very sensitive to motion. But is it the same for budgies? Here's the answer.

Like humans, budgies can experience motion sickness and they can throw up when it gets too bad. A budgie's brain can receive conflicting messages - from his eyes and the rest of his body - about whether he is in motion or not. There are certain factors adding to this problem, like stress and exhaustion or a lack of oxygen. Never feed your budgie right before you're taking him on a car trip.

If you need to travel somewhere, you'd better start with short distance trips to determine whether motion sickness is a problem for your budgie. Make sure to provide enough oxygen throughout the whole ride. It also helps to cover the cage and play some soothing music, so your budgie can relax more easily.
Posted by Bika at 4:10 PM No comments:

These two cute birds would love to make your walls pretty. The original artwork is water coloured and textured with crayon and confetti.

In this picture, a harvest girl meets a feathered friend in the field. This could be a nice greeting card for a special friend.

Want to take a look at the website? Go here.
Posted by Bika at 12:43 PM No comments:

All about budgies? (Tagxedo)

Remember the Wordle Cloud I once made? It clearly shows what this blog is all about ;-)

Tagxedo does pretty much the same thing... I was even able to choose the shape of the word cloud! Does this look familiar? 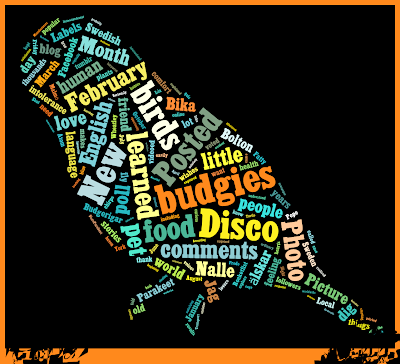 This sums up most of my latest post (about Disco and Nalle), but I also spotted some familiar names like Pope Rocketfist, Frodo and Isla and... Whipper. I wonder how our good old friend is doing. Has anyone got news about him?
Posted by Bika at 9:30 AM No comments:


This budgie is called Disco and lives in New York. He has been learning Swedish to comfort a feathered friend from Malmö (Southern Sweden) who was feeling a bit 'under the weather'.

“Jag älskar dig, jag älskar dig,” chirps Disco, sending thousands of love greetings for his friend over the ocean. Meanwhile, his sweet little bird voice has won the hearts of thousands of bird lovers around the world.

Owner Judy Bolton quickly realised that the world went cuckoo over her pet bird. She set up a Facebook page (Disco the Parakeet) and a Twitter account for Disco (@DiscoParakeet).


But Disco is not just an ordinary talking budgie. When he learned that one of his Facebook friends, a blue budgie called Nalle from Malmö, fell ill, the New York budgie learned how to comfort the budgie in a language Nalle could understand.

The result was captured in a short and sweet video:

Bolton explained that Disco is such a quick learner because he can mimic human voices very easily, no matter the language.

“Well, what’s legal?! Seriously, language-wise, the sky’s the limit. Budgies can learn a LOT of languages, and he’s very young, not even two years old," she said.
“He seems to know when we’re teaching him something new, and he gets excited about it. He recently learned the Rolling Stones' hits 'I can’t get no satisfaction' and 'Shattered' and they seem to be his favourites right now."

At first, Bolton was surprised by her pet’s internet notoriety, yet soon found that thousands of people worldwide had made fan pages for their own quirky pets, including Swedish Nalle, who even has his own blog.

Bolton needed only a little convincing at first, she admitted, but has now embraced the opportunity to add a little chirp to the online world.

“It’s really pretty nutty, but people love animals, and I am told all the time how much Disco makes people smile, including people dealing with major health issues. That makes us happy here!” she said.


There's not only a strong bond between Disco and Nalle. Bolton pointed out that the underlying story of the budgies is one of international human friendship.

“Disco was videoed saying ‘Jag älskar dig’ because this human was worried about Nalle’s human while she waited for news about her little pet bird," she told The Local. “We need more of that in the world."

For those curious about Nalle’s response to the warm wishes, the recuperated birdie said "Puss och kram mitt lilla hjärta" ('Kisses and hugs my little darling').

For those hwo haven't noticed yet... Disco is my new budgie of the month :-)