Poor Budgieman. For most of his life Don Crown, the world famous London busker "Budgieman" has been entertaining tourists and Londoners with his magical budgies that perform tricks and stunts to his songs. Why is the council now labeling him as a criminal and threatening to fine him, confiscate his budgies and send him to prison? All he wants to do is sing his songs, let his budgies perform and bring smiles to peoples faces from all over the world. But now the local council have banned him from performing on London's Southbank, forcing him and his budgies into busking retirement. 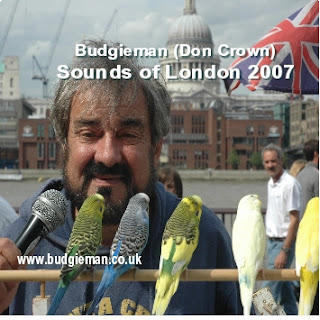 Budgieman first started busking in 1969, over 30 years ago. He has always been with his budgies, and for a period of 5 years with his performing dogs.

He has performed in Leicester Square, Covent Garden, Charing Cross Road, Carnaby Street, Oxford Street. Also outside famous landmarks such as The Palace Theatre and The London Paladium.

During the 70's he raised a petition with hundreds of signatures and took it to the then Prime Minister Margaret Thatcher at 10 Downing Street. We still don't know to this day how successful it was, but shortly afterwards they did start to allow buskers in Covent Garden.

Please support this cause and register your views. Join his Facebook page, buy his songs on iTunes, listen to him on MySpace, watch him on YouTube. Allow him to raise money for charity. You can sign an online petition on Facebook here.

Entertaining is not a criminal offence. Making tourists and Londoners laugh and smile is good for everyone. Unfortunately Southwark Council have not been able to comment, but we welcome their views.

Budgieman has been entertaining Londoner's and tourists since 1969. He is now being branded a criminal and being chased away from his busking spot outside The Tate Modern on the Southbank. Save the Budgieman !!!