Victor was a very remarkable budgie, who apparently not just mimiced the words he heard but also understood the meaning of them. He made jokes (mostly when picking fun on his mate Betty) and played with words. According to his owner Reynolds, he started almost every recording with little rhymes. One of his storytelling accomplishments was a twelve part series where he talks about passing from this world and what the afterlife would be like. You can hear this story in his series called "Heavens Gate." It is possibly the most inspiring story ever told by a nonhuman being. 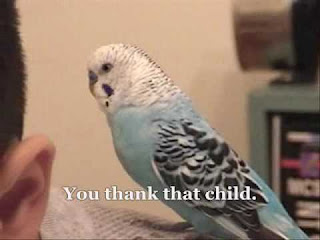 This budgie also seemed to do more than just mere talking. In the next video, Victor predicted his own death. He has also a message for the PETA so they will not think that he was abused in his life.

(if you think you will be scared, don't look at this)

In "Heavens Gate", he also spoke of a volcano in Mt. St. Helens that would devastate the world in the near future, sending ash and causing millions to flee. After that, he says that earthquakes will begin. He says that in the future, budgies will learn to speak and help the world by warning of future disasters.

I am safe in here, uh, huh.
This part convince me God speak to budgie
But he spoke there, like he has known Victor, parts of life
Okay, now tell me what's above life!
You will teach them all for talking budgie contest!
They'll make this world for future, for people around.
Poor Victor doubt Ryan.
Ryan still hope in something but
the beautiful vast don't believe in bible. Yeah.
What's a blue budgie?
Don't we believe we good to help like that?
Ideally what's right? They're too often afraid to!
You all seem to act stupid!
Conduct your life! Work on stuff!
A purge help it. I can arrange it.
Don't put it off!
Be new year, big volcano, not nuts
Erupt ash on mill-ions!
The ash will happen some day
When it comes up you have right to know!
Okay, take a look at... earth
That produce death
Causes earthquakes
This could possibly refer to what happened in 2004. Could he have known this all along?

Many people wonder what is true about this and what is not. Personally, I think that Victor was a very intelligent and talented budgie. I don't know if budgerigars are able to see in the future, but then again, for all I know it could be true. There are many sceptics who think the whole story about Victor is a hoax.

The internet is full of information about this case study. Here are some interesting links:

The Phases of Research

Talking budgie predicted his own death

Budgie gets religion on death bed
Posted by Bika at 11:11 AM