Some budgies are capable of things that we never dared to think of. They speak a secret language and see into the future, prepare a secret plan to lock all the cackling visitors that their owner gets into a human-sized cage and they don't need a GPS to find a waterhole in the Australian Outback. But we may have forgotten something important. They can become very, very big if you feed them the wrong seeds...

(this may be a bit too silly to include in my blog, but I couldn't resist :) 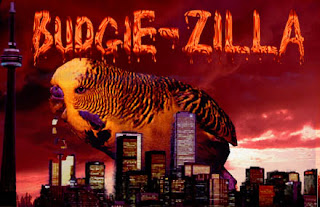 They came. They saw. They ate. 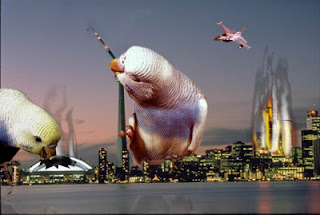 "Not as good as millet, but will do." 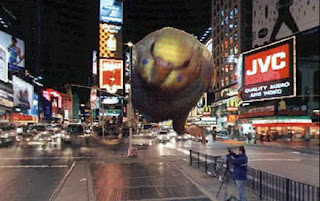 "this thing is much too big to be some lost dinosaur."

While Cody the Budgie takes a stroll down Yonge Street in Toronto, John readies his tranquilizer gun. Whoever let it come to this?

This is the story:

When Mrs. Plyers bought her first budgie, she wanted to take good care of it. After all, with her husband gone, and her son's family trying to make their fortunes in the Maritime provinces, she would need a good bird to keep her company.

So when she saw the special "Growth Formula" label on the new brand of bird seed in the pet store, she snatched it up right away and promptly fed it to to her bird, Herbert.

She was only one among the dozens of people who did the same. Day's later, Mrs. Plyers woke up to find the cage destroyed and a three meter high budgie-shaped hole in the wall.

The formula had worked well. Too well. Over three dozen birds had eaten the new formula, and they were now on a destructive rampage through the heart of downtown Toronto. And they were growing. On top of it all, Mrs. Plyer's son, John, had just come home with his family for a visit! Luckily, John happens to look just like Arnold Schwartzeneggar, and his wife, Liz, who resembles Demi Moore, has had over five years of avian veterinary training. Together, they make formidable foes for the big bad birdbrains. 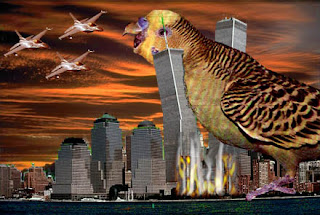 Nobody knows how to stop them.
At first, it is no small feet. The birds have grown three stories tall. There's no trouble finding them, though. The budgies leave a tail of destruction wherever they go. It's up to John and Liz to figure out a way to stop the birds -- before they wipe Toronto off the map!

Update: my fiancé has spotted big budgies in Brussels today! He got the chance to take a few quick pictures before all hell broke loose: 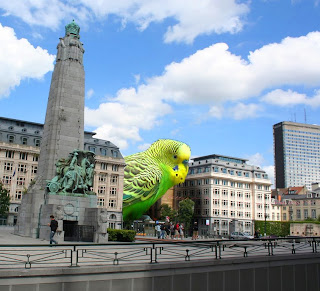 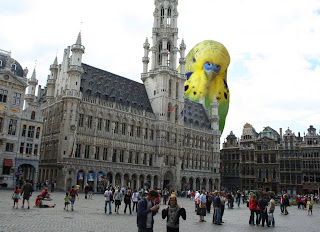 Luckily, all of this didn't happen for real. Personally I think we would live in a better world if it was to be taken over by budgerigars. In the budgie world, there are little to no conflicts and budgie partners stay loyal to each other forever. Thanks to Steven Hanov for creating this movie parody! Find out more on his website.

Also a big thanks to my fiancé, who uploaded the photos with the big budgies in Belgium! Check out his wonderful blog here.
Posted by Bika at 12:27 PM