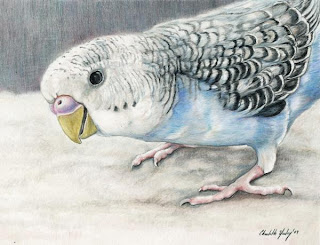 Many people believed Victor was the Einstein of parrots. Back then, the record holder of the "Most Proficient Talking Bird" was an African Grey parrot named Prudle. Victor mastered a vocabulary of at least 800 words, equal to the parrot's vocabulary, but he also seemed to know the meanings of the words.

Reynolds, owner of Victor: "Victor could speak and understand concepts the same as a human and it wasn't until several years after his death, that I began to really understand what he was saying. So you will often hear me asking Victor silly questions in the videos. I guess it was my way of couching him to talk, but little did I know what he was really saying. I would only catch about 5% of what he was saying in real time."

"I would often put myself in his place and ask how would I feel if I was in captivity and I had someone two hundred times bigger than me taking care of me? How would I feel about trusting someone, who was basically my captor. All budgies are born free by nature and part of their natural instinct is to do what they want to do. They do not like to be told what to do. They can become very close to humans, but they have to be treated fairly and with respect. Most importantly when it comes to talking and bonding with people, they can get discouraged very easily. Once they are discouraged you may never have a bonding type relationship that will facilitate them wanting to communicate with you." 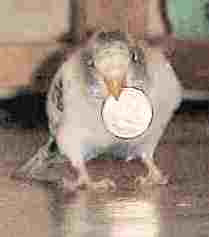 ictor had only seen other budgies when he was still a baby. After 3 years, Reynolds got him a mate, Betty (she looks like a clearflight pied type, but I'm not sure). She was his mate for approximately 3 months before he died. During that time, she picked up much of his vocabulary. Her pronounciation is less good because she had a lot of contact with other budgies and spoke their language with them.

In this audio, Victor seems to be aware of the fact that Betty came from a pet store and wanted Reynolds to thank the pet store for her.

"Betty was even progressing faster than Victor, due to the training he gave her. Once he knew that Betty was learning from him, he said he wanted to start a budgie school. He was also proud and called himself her teacher. Victor believed that he had important things to teach people about budgies as well. That is one of the reasons he liked to be recorded. He wanted everyone to hear what he had to say. I believe one of his goals in life was to teach people how special budgies can be."

Victor is giving Betty his school lessons under the kitchen table.

In this audio, Victor is happy because Betty starts talking, which makes him a good teacher.