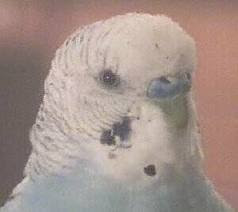 Victor was, like many budgies, bought at a pet store, at the age of 8 weeks. He lived from 1997 until 2001, and in those years he did the most remarkable things. Things that might send chills down your spine.

Ryan Reynolds awoke one morning on a holiday and looked over at his budgie, Victor, who looked back at Ryan and said, "Pretty Ryan, where's Onie?". It was at this moment when Victor commented on the empty bed beside Ryan normally occupied by his wife, Apollonia, that Ryan began to wonder if Victor was no bird brain.

"A year ago, he started to say things I hadn't taught him, and he was describing things I was doing", Ryan says.

Ryan Reynolds is a Canadian psittalinguist: a person who interpreters the language of the parrot family. His budgie Victor had a vocabulary of over 1,000 words, which he used in context. Basically this means that Victor knew well what he was talking about and not just mimicing human speech or talking gibberish.

Reynolds, founder of the Budgie Research Group, worked long and hard on the deconstruction of Victor's recordings. He later reached out to others with talking budgies, coining his work in the term Psittalinguistics. "A sensitive ear is crucial because budgies talk at a rate of 150-200 words a minute", he says. "It takes a lot of skill and concentration. Budgies have a particular way of pronouncing words. It's like picking up accents." 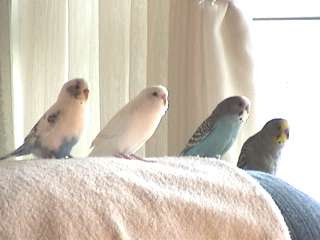 From left to right: talking budgies Betty (mate to Victor), Toovic, Topper, Amber
"This is going to sound crazy, but they talk about spiritual things: God, the afterlife, a better world for them", Reynolds says. Could this reflect the thought of a thousand generations of budgerigars who had to survive the harsch inland conditions of Australia for millions of years? Or is it the thought of budgerigars who are locked up all their life for the entertainment of mankind?

Reynolds says that Victor predicted a "tsunami on the South Bank of Asia" and warned of an upcoming "super volcano". Only a few years later In the weeks before he died, Victor said that God was coming to take him away.

"One thing I have learned is a budgies thinking process is many times faster than ours. By the time we analyze and process one thought, they may have processed several of their own. This is mainly due to their anatomy being so much smaller than ours. Because of this, their brain waves do not have to travel as far, therefore allowing them to process thoughts more quickly. Additionally, because the average life span of a budgie is around ten years, one hour to us would be equal to several hours for them. This is evident in the way Victor talked. He had to make a conscious effort to slow down so he could communicate with people. This also enabled him to learn much faster than we do. Victor began talking at less than one year old and he was only a little more than three when he died. During that time his mind had rose to a level of an adult person. This may seem hard to believe but he proved this in many of his later conversations and recordings."

Victor died several years ago, which makes it impossible for anyone else to study him. This is one of the reasons why some people suspect that Victor's ability was just a hoax set up by Reynolds. Is he just saying all those words to make his owner happy? Or is Reynolds really right about Victor, and many other talking budgies? Do they understand us? Do they somehow have the ability to see into the future? Or do they just feel certain things that we can't feel - like birds that stop singing right before an earthquake is about to take place? What do you think?

Here is already one recording of Victor:

More about this remarkable budgie in the next post.
Posted by Bika at 7:27 PM