If you buy your budgie, he may have an ID band around one of his legs. If you take a closer look, you can see numbers and letters. If there aren't any numbers or letters on it, then it's a family band or "split band" - a coloured band that is split on one side so it can be placed and removed on a bird at any moment in his life. Breeders use this to keep track of the family line of the budgie. But it won't tell you anything about the budgie's age. 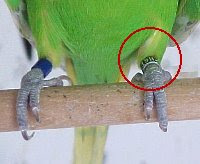 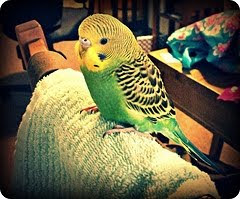 On the ID ring, you can read the following information in this order:
You can also check the ID band colour. Different colours represent different years, it's an easier but less reliable way to find out how old your budgie is. You can find a short list on the ID band colours here. For the new six-year cycle that started in 2009, go here.

In Belgium, the system is pretty much the same. There are the so-called "open rings" (family bands) to keep the different families apart. To get hold of the "closed rings" (ID bands), you have to be a member of a bird/budgerigar club. On these rings, you can find the following information:
You can choose between a regular, silver or coloured ring.

Information and images (c) budgieplace.com; budgerigarsociety.com
Posted by Bika at 9:18 AM