In 2000, 20% of Australian birds were listed as threatened. The most contributing factor is the on-going clearing of vegetation for the purpose of both agricultural and urban expansion. On top of this, Australia has to deal with climate change that increases the frequency of heatwaves and changes rainfall patterns.

Urbanisation in Australia always begins with a total clearing of the area. This leads to devastating results for the biodiversity.

Where do budgerigars play a part in this? 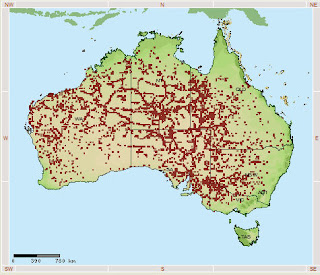 Budgerigars in Australia. Map (c) Birdata.com.au
As you can see, budgerigars are all over Australia. They cannot possibly escape what's happening, though at the moment their wildlife status is still secure. What threatens them most might not be urbanisation, but especially agricultural expansion in combination with climate changes. A more recent article on Australian bird conservation says that many birds that depend on the Australian network of wetlands are getting in trouble. Among those birds are budgerigars, who are often on the move in search for a new waterhole. Any undesirable changes through river regulation, water diversion, land clearing or salinity puts the life of the wetland birds in danger. 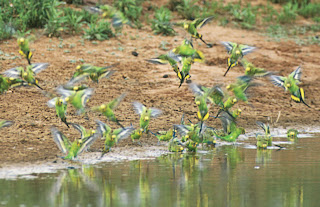 Budgerigars drinking at an isolated dam. Photo (c) the state of Australian birds, 2004

There are thousands of budgerigars living in the central part of Australia, where it's very hot. They already have to cope with a severe climate and would do anything for water. You don't need to imagine what happens when there is water shortage, for it has already happened in the past. When they finally find water, budgerigars go insane and all swoop down at the pool at the same time, being so thirsty that they accidently drown each other. A water-hungry venture such as agriculture only increases the risk of this horrible accident.

What can be done?
To read the latest report on the conservation status of Australian birds, go here (2010, Islands and Birds)
Posted by Bika at 7:49 AM