What would Whipper do? 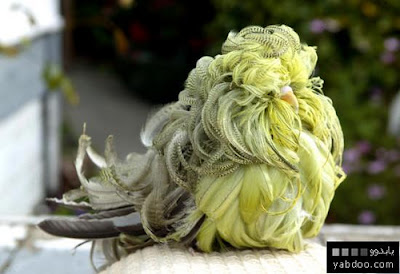 ... if someone told him he looked like a feather duster and not like a budgie?
... if someone asked his owner if he always has a "bad hair day" ?

Whipper, who hatched right before Christmas 2003 (if I'm correct), was rejected twice by his parents. Out of mere instinct, his mother decided to take care only of the "normal" babies. His owner Julie Heyward found him sprawled on the ground, picked him up and put him back, only to find him lying on the floor again shortly afterwards.
Life in the aviary was too cruel for the bizarre-looking budgie, so his owner set him up home indoors in a bright purple cage. A lot of people think he's cute and, in more than one way, special.
Unfortunately, that charm is failing to impress other birds. None will look at him twice, even when he sings while hanging upside down. He will probably never find a mate who preens his feathers and sits close to him when the sun goes down. Before he started growing the long, curly feathers, he made some noises that were very unlike other budgie noises. 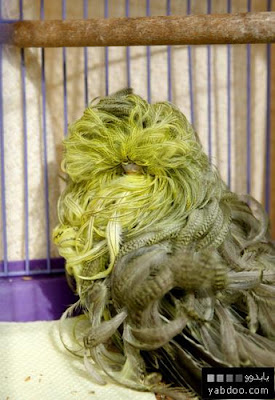 "He sounds more like a budgie every day, than in the beginning, when he made his own language. We put him next to the big aviary, so he's actually learning to speak like the other budgies. It's quite interesting." says his owner Julie Heyward.

I think Whipper would eventually find his place among the other budgies, if they give him the chance. It takes some time to get accustomed to him, but keeping him apart wouldn't do him any good. He has his loyal fans from all over the four corners of the Earth, but he needs bird company as well. He can't fly and they are not sure whether he can see or not, but otherwise he acts just like a normal budgie. Most budgies of the feather duster variety (the first one appeared in the fifties in the UK, as a result from showbird breeding) usually sit and do nothing. Whipper on the other hand is just himself and doesn't seem to be bothered by his long feathers at all! Now that is one strong budgie!
Posted by Bika at 8:19 PM