Budgerigars in the wild live together in large flocks, sometimes of over one thousand birds. The flock movements are based upon the availability of food and water. During times of drought, they fly over vast distances to find a source of water. Budgies seemingly sense when it's raining, miles and miles away from where they are. Because when times are harsch, they fly directly to that area, without taking detours. The journey is often long and full of danger, but when they get there, it's very rewarding. Arriving in a perfect green nesting area, they have fulfilled their mission of life and can start over again.

Wild budgies are mostly active during the early morning hours and the late evening hours. To avoid the heat of the day, they stay sheltered in trees and bushes. During times of drought, water may be very scarce. Being inactive is a good way to conserve moisture. Budgies can go up to one month without water. But they always need to eat. A budgie's metabolism is very speedy, and if they don't eat for more than 46 hours, it could mean their death.
When budgies are active, they use their time well. They spend most of their time drinking from waterholes, scanning the area for grass seeds and scurrying from tree to tree to find a good place to rest. When there aren't a lot of grass seeds, budgies try to find some nuts, insects and fruit or bark from Eucalyptus trees. 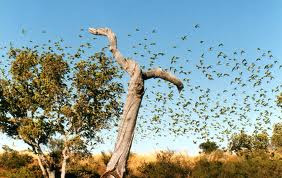 All budgies love bathing. The riverbanks are sometimes too deep to bathe in, though. Instead, the budgies love to roll around in morning dew, or soaking wet, long clean grass.

Natural enemies of wild budgies include snakes, the Butcher Bird, hawks and falcons. The most dangerous enemy of the budgies, however, is often nature itself. Droughts can kill thousands of them. 1932 is known as a black year for budgies and other small birds, when conditions were far more savage than usual. This year is also referred to as the Bird Holocaust. Entire flocks lost their lives in an attempt to find food and water. When they finally found some water, thousands budgies would swoop down for a drink and be drowned as a result of many birds landing on top of eachother. There were horrible reports of millions of budgies dying that year.

After the big disaster, the budgies did their best to repopulate the lost numbers. There are still a lot of wild budgies in Australia. However, industrialization has taken away much of their natural habitat. Wild budgies are not an endangered species yet, but if people keep on destroying the places where they live, they may soon be.