I saved these budgies for last: the rare and unique colour and pattern mutations. You won't see these kinds in a pet store, only in budgie exhibitions.


In this variety, the feathers on top of the budgie's head point awry, forming a crest.
There are three types of crested budgies: full-circular crest, half-circular crest and the tufted crest. 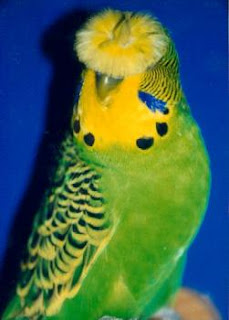 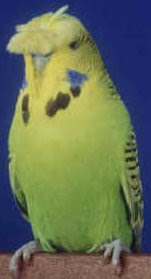 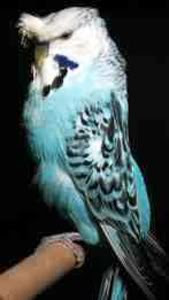 
This is also a very special budgie variety. A fallow budgie's body colour is mostly diluted, but you can still see it on the rump. They have pink/red irises and a brownish striping pattern. Adult males have purple ceres while females keep the normal white, tan or brown ceres. 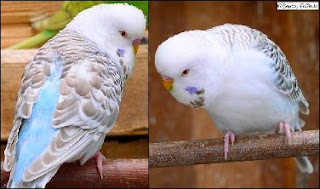 Blue fallow budgies: the body feathers are diluted, but the blue colour is visible on the rump.

Saddleback budgies have very thin grey markings on the head and the neck. The area between the shoulders and the top of the wings (V-shaped) has almost no markings, leaving a clear "saddle" behind. Saddleback budgies look a lot like the Opaline variety, but Opalines have black markings in stead of grey markings. Also, the background colour of the wings and back of an Opaline budgie are identical to the budgie's body colour whereas saddlebacks have only the base colour in those places (white or yellow). 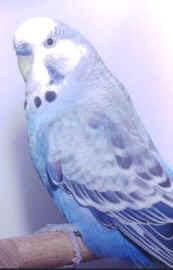 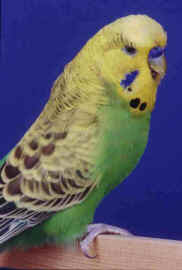 Two saddleback budgies: soft grey markings on the upper half of the wings, V-shaped yellow or white area between the neck and top of the wings.


The standard for the Texas Clearbody is to have no colour in the body feathers except for the base colour yellow or white. There can be some degree of colour, though, if the body feather colour is diluted. In that case, the body colour is visible near toward the rump feathers. The wing markings are black but fade to grey toward the tip of the wings. 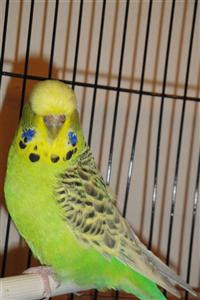 Two Texas Clearbody budgies: the one on the right has colour dilution up to 50%, but the body feather colour is clearly visible near the rump and tail.


Just like grey and violet, slate is a colour-adding factor. Slate produces a dark bluish grey, which varies slightly according to the dark factor of the budgie. It can be present in a green budgie, but will only produce a darkening effect. The true slate appears only on white-based budgies and this variety is extremely rare. 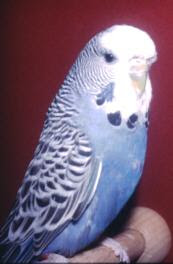 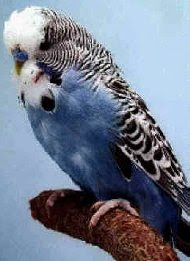