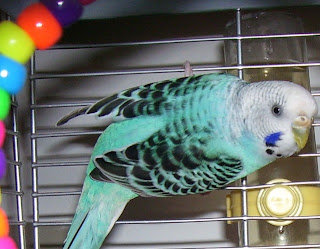 Blue opaline budgie: notice how thin the black striping pattern is on the head feathers
(photo: talkbudgies.com)
Opaline budgies have reversed head markings. Spangle budgies have reversed markings on their wings and tail. Normally, you can see a black striping pattern with white edges, but spangle makes the wing and tail feathers almost entirely clear. Unlike opaline, spangle doesn't cause the colour of the body feathers to spread throughout the neck- and wingfeathers.
There is a possibility, though, that your budgie can be both opaline and spangle. These budgies are actually common and have a unique striping pattern. 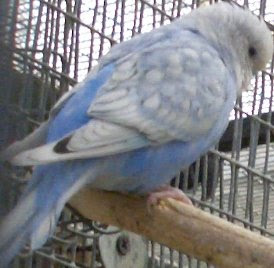 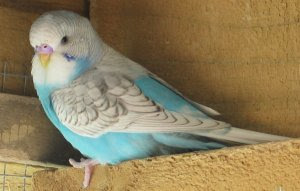 Left: Spangle opaline budgie, with reversed markings and colours spread out all over
Right: This is a single factor spangle budgie (a budgie that is also opaline will have a pattern of colours through the wings) 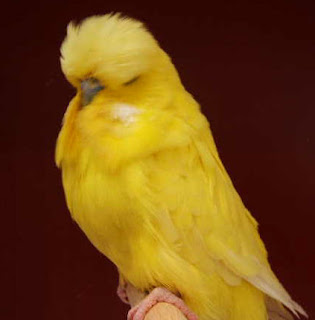 A double-factor spangle budgie is all clear (because the markings are so thin that it looks like they have been mixed with the body feather colour) - except for the basic colour yellow or white. 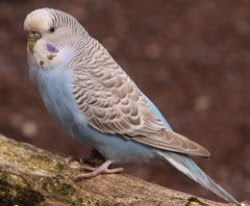 Cinnamon is a special striping colour mutation: it causes the normally black markings of the head and wings to turn brown. This mutation doesn't really affect the budgie's colour, but might give their feathers a faint cinnamon tint - a warm, lovely brown shade.