Inside the brutal world of budgie shows

NOTE: I'm not saying budgerigar breeders are bad people. I'm just pointing out some of the cruelties that happen for the sake of competition, and how budgies sometimes are treated as objects.

Last year, in 2010, budgie fans from over the world convened for the 85th annual Budgerigar Society Club Show, held in Doncaster (South Yorkshire).
All around you could see white, uniform display cages and in each cage was a single budgie, the result of years, sometimes decades, of careful breeding. That weekend, the room contained many of the "best-looking" budgies on the planet. In total, over 2.000 budgies were present with their owners. 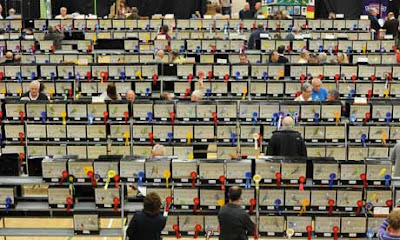 But, to which degree do these breeders care about their birds?

Quote by Mick Freakley, twice world champion budgie breeders: "We are serious breeders. We work for decades to produce these birds, which are envied the world over. I swear to you, if there wasn't a competitive element to this I wouldn't keep them."

When budgie breeder Andrew Pooley walked into his aviary on the eve of the great competition, the silence told him something dreadful had happened.
His fears were soon confirmed: on the eve of a big show, 21 of his prized birds had been stolen and his champion, Penmead Pride, had been stamped to death.

Pooley, from Delabole in north Cornwall, said:  "I feel terrible. It has been my life's work and Penmead Pride was my first registered champion. I can't believe it.

"Whoever took them knew what they were doing because they have taken the best of the best. It must have been someone who wanted me out of the show. This was a deliberate act of sabotage ."

It was not an isolated incident. In the world of budgies, such thefts are a serious business. "It's not people who want to let them go," says fellow hobbyist Ainley. "The chances are these birds are stolen to order, never to be shown but just for breeding purposes. Or they'll be shipped abroad."


Two more budgies were stamped to death and seven more budgies died from shock shortly afterwards.
But Pooley vowed to continue breeding birds. "I'm not going to give up and let them win," he said.

More than a financial loss

If you're expecting to hear anything that has to do with warm feelings for budgies in the following paragraphs, you can stop reading already.

Losing birds is much more than a financial upset. "It's all about bloodlines," explains 39-year-old James Theobald, a recent recruit to the hobby whom Freakley and Ainley have taken under their wing. "I'm in a position now where I'm lucky enough to get Freakley and Ainley blood. They can pick and choose who they sell to. There are millionaires who do this hobby. People would rip my right arm off to get hold of the birds I have."

So budgies are just prize objects to those people, then?

Today, there are a little over 3,000 members of the Budgerigar Society. At its height in the 50s, there were more than 20,000, and the yearly Club Show vibrated to the shrill chirruping of as many as 6,000 birds. It is, like most outdoor pastimes, a hobby in decline. The average age of breeders at the show is somewhere around 60, and what few new recruits there are come almost exclusively from budgie-fancier families. In more ways than one, breeding budgies is all about bloodlines.

Once budgies find a mate, they are inseparable. They eat and sleep together, they preen each other with a love that goes deeper than you can imagine.
Often, budgie breeders separate a pair that is already together in order to obtain the right combination of bloodlines. More than once, these attempts have resulted in nothing else but the death of one of the budgies, because they were forced to do something they couldn't do.


Images and information are © to The Guardian
Posted by Bika at 8:20 PM