One thing that is interesting to know about, is the breeding behaviour of wild budgerigars.
How can they stay alive with a high Summer temperature and an unpredictable low rainfall as an annual constant? 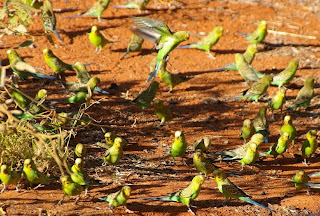 Budgerigars are nomadic birds. They will always move on to a better spot when times are hard. Another technique for them to stay alive in the dry Outback of Australia is by following thunderstorms. The smallest bit of water after a dry period can attract explosive numbers of budgies. When they run out of water, they have to move on until they find new water. Sometimes, a drought like this lasts several years. Whenever there's an opportunity, they have no choice but to take it. 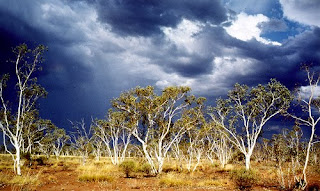 Rainfall doesn't just mean salvation for the brave little yellow-green birds - it also marks the beginning of the breeding season. Rain means a brand new food supply - one that can feed enough beaks. Budgerigars have adapted to this unpredictable climate by activating their breeding cycle very quickly after the rain. They respond sexually to the good times, but when food supplies are limited by drought, they have no desire to mate and are unable to breed. In short - they're too busy surviving.

But even though rain is necessary, it's not going to decide completely whether the budgies will bring their breeding activity to a succesful conclusion.
Nature has got many seasonal, climatic, geographical and geological challenges in store for them. Taking this into account, the budgies will also have to keep their eyes peeled for danger. They're not the only animals who want to settle down in a fertile area after months of drought. 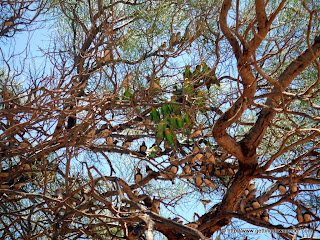 The soil in the upland areas of the Outback is more fertile than the reddish brown soil in the lowland areas. But the lowlands soil is rich in iron, and contains a lot of calcium in some parts. This calcium supply is a determining factor in the budgerigar's selection of nesting grounds. Calcium is necessary for egg production, which is a crucial part of the breeding cycle.
Beyond the lowlands, there lies a no-go place for budgies: the inhospitable sand deserts and barren plains.

There are Acacia shrubs dispersed throughout all of the lowlands, together with a diverse range of grasses. The grasses start to flower when there's enough rain, providing the famous grass seeds that budgies love so much. However, when it's really too dry, the grasses are completely useless as a food supply. The budgies are then forced to the dangerous sand deserts beyond the lowlands, where they are unable to breed. Desert vegetation that provide enough nutrients for the budgerigar's survival consist mostly of tussock grasses, Spinifex, Bandicoot Grass, Blue Bush and Salt Bush. This might keep the budgies alive for a good while, but the lack of rain and the absense of calcium-enriched soils make it impossible to breed. 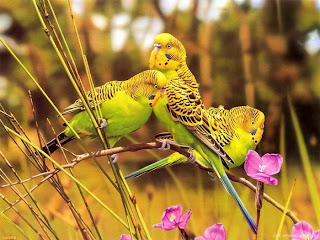 Although not everything, the wet season determines a major part of the budgerigar's breeding cycle.
The starting time and duration of the wet season vary from year to year, partially depending on the monsoon activity further North and West of Australia.
The so-called El Niño and La Niña phenomena also have a major effect on the starting time and duration of the wet season.
An intense El Niño results in drought and often means death for some budgerigars. A normal El Niño results in monsoon activity in November, extending throughout the whole Summer (until April). The success of the budgies' breeding cycle is heavily dependant on both El Niño and La Niña - phenomena that appear to follow a 1500-2000 years long cycle. La Niña (or "anti- El Niño) is often followed by a strong El Niño. For the budgies, this is translated into: "Now we've survived the worst, it can only get better". La Niña causes mostly the opposite of El Niño, and since El Niño often causes a dry period, La Niña often brings salvation for the budgies: a wet period. When La Nina dominates the weather pattern, the number of budgies will rise again. 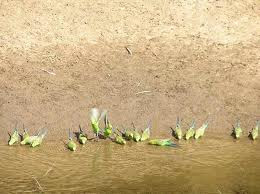 In the Australian Outback, water is scarce and budgerigars must seek to find this in order to survive. About 80% of the desert waters come from thunderstorms. The thunderstorms are heavy and cause a flood, flowing down the slopes, into the dry riverbeds. These shallow rivers, waterholes, make an ideal nesting area for the budgies.

Finally, they found the perfect place to take a break from their nomadic life and start a family. They've earned it!