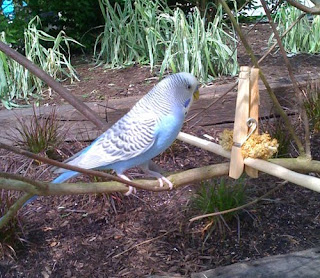 Photo from http://blisstree.com/live/budgie-love/
For many years, budgie breeders have had awful disease problems, encountering outbreaks that sometimes destroyed their whole flock of budgies. On top of that, some birds just never seem to be healthy at all. They just sit on the aviary floor all day, listlessly. Antibiotics and bird medicins help only little, and they don't take the real problem away.

Recently, there has been a major breakthrough which has shown that Vitamin D3 (the vitamin D you get from sunlight) elminiates these problems.

In the article I read, a breeder tells how he tried everything to cure his budgies, but nothing helped. One of the major problems was infertility. Then, a year ago, he read about a new research on vitamin D3: it was breathtaking in its revelations. The research had been performed on humans, but it's also revelant to budgies.

"Vitamin D3 does a lot more than build bones, it is a powerful anticancer agent and it regulates the immune system. Low Vitamin D3 levels in humans have been linked to many serious illnesses: various infectious diseases, cancers (such as breast and prostate) and autoimmune conditions. Identical twin studies showed that increased sun exposure as children can reduce the chance of developing Multiple Sclerosis by up to 57%. The same applies to autoimmune diabetes, Crohn’s Disease and tuberculosis."

(I already read that auto-immune diseases like diabetes are a common problem in the North-Scandinavian areas, where there is no sunlight during the long Winter)

"New research also confirmed that in humans, vitamin D deficiency has been linked to infertility in women and poor quality sperm/ lower fertility in men."

"In humans, ultraviolet B light (which is part of normal sunlight) acts on oil on your skin and turns it into Vitamin D3, which is then re-absorbed. In budgies oil is taken from the preen gland at the base of the tail during preening and is spread all over the feathers. This is turned into Vitamin D3 by sunlight and the birds consume it later on during further preening. This is essential for the budgies’ health."

"It gets worse. Even “full spectrum” fluorescent lights lack UVB light. They produce the wrong sort of UV light, that is UVA. While certain foods contain Vitamin D3 such as cod liver oil, this is a messy and dangerous supplement that does far too little to help. It may assist in safe egg laying and other calcium issues, but not much more."

Basically, the breeder realised that the budgies needed SUNLIGHT. Not just putting the cage behind glass (UV-light doesn't travel trough glass or clear plastic or fibreglass). The budgies needed real sunlight to stay alive and well. 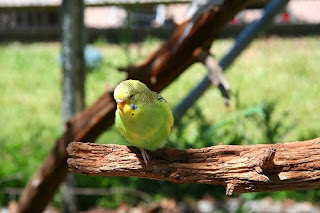 Photo from http://www.flickr.com/photos/patflinschrod/611247100/
The breeder then removed all the glass windows that blocked the sunlight for the budgies, and added vitamin D supplies to their water. He also installed reptile versions of full spectrum lights which had a fair amount of UVB emissions. A year later, the results were spectacular. His budgies lay eggs again, and there were barely any sick or dying budgies.

Not enough people realize that Vitamin D3 via sunlight is one of the best medicins in the world. It creates a protective layer against many diseases and a whole list of cancers. It controls over 1,000 genes in the human body. And there is absolutely no better way to get it than to expose yourself to the sun - as long as you don't exaggerate (then you'll only get skin cancer).
Budgies react to it the same way, so if you want to keep your feathered friends healthy, you should give them some sunlight whenever you can!